Wireless devices were just too fast, flawless, and friendly to use in comparison with the more conventional wired devices. The wireless devices disrupted many stronghold wired devices and soon became the new trend. Almost every top company indulging in networks and communications immediately poured tremendous time and effort into their research and development teams to understand wireless technology and eventually make it a part of their prime offering. Apart from the initial teething problems like deployment and compatibility, wireless technology was high flying and had more advantages than any other wired technology.

The surge in the amount of internet users will only ascend in the forthcoming years with the IoT grabbing more limelight than ever before. Software Defined Networks (SDN) and Network Function Virtualisations (NFVs) help make wireless networks faster than normal. The stability and strength of a wireless infrastructure is imperative to all working environments, governing their flow process and other operations. Controlling some of the most crucial processes and procedures, wireless networks depend heavily on state-of-the-art wireless technology to drive them.

To help CIOs pick the best solutions to drive their wireless technology ventures, a distinguished panel of CEOs, CIOs, VCs, analysts including CIO Review editorial board has chosen the top 20 companies that are spearheading innovation in the wireless technology arena. We present to you CIO Review’s ‘20 Most Promising Wireless Technology Solution Providers – 2018’. 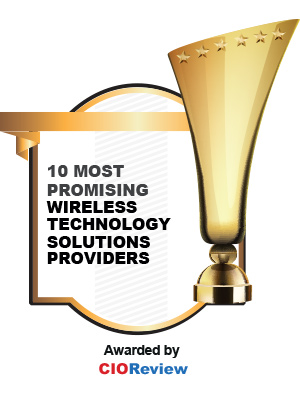 Our subscribers nominate the companies with whom they have collaborated and gotten results. If you think there is a company that deserves to be on our upcoming prestigious annual list of Top 20 Wireless Technology Companies , please write to us about them and the reasons you think they need to be on the list

Your nomination request for upcoming annual list of "Top 20 Wireless Technology Companies " has been Successfully Sent . We will be in touch with you shortly.